Tutorial Install kinemaster on Laptop Without Emulator - Kinemaster is software that makes it easy to edit or edit videos. It is equipped with many interesting kinemaster functions. 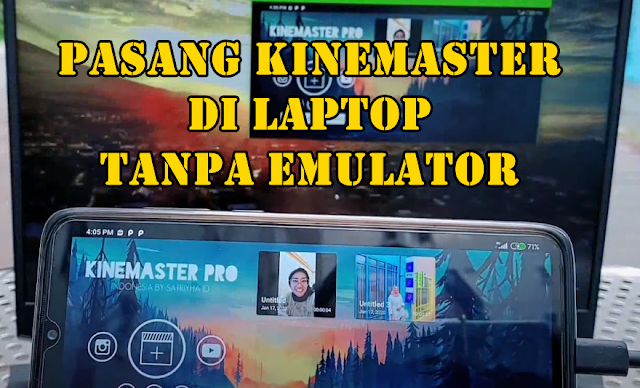 Kinemaster can not only edit videos but also convert photo files to animated videos.

Kinemaster is an app that works on Android. So if you want to edit videos then use Kinemaster. You need to download Kinemaster from the Playstore.

You can run Kinemaster with emulators like Nox, Bluestack, and others on a PC.

Downloading Kinemaster for PC without emulator is the most unique method because you can run Kinemaster without the emulator.

You can download the Kinemaster app for free. and you can also use it directly without paying.

In this free version, however, the results of your Kinemataster watermark for video editing are displayed at the top of the video.

Of course, this Kinemaster watermark makes our videos less attractive because the software owner's logo is written.

The solution is that the watermark is lost in our video edit. If you subscribe to the Pro version on the Kinemaster in the PlayStore, the watermark will disappear.

With your Android smartphone, you can edit videos with the Kinemaster app. and in my opinion, this Kinemaster app is currently the most advanced video editing app.

How to connect an Android smartphone to a computer

For those of you who want to edit videos with Kinemaster, you can do it on PC / Laptop.

And the tutorial I'm going to talk about this time is done by Kinemaster without an emulator, but through an Android phone connected to a laptop / PC.

Some of you may have difficulty in editing videos with Kinemaster on Android smartphone because the smartphone screen might not be as big for you.

The solution that I am going to share can be very useful for those of you who are struggling to edit videos on Kinemaster using Android phones.

With a USB cable, you can transfer the Android screen to the computer. Of course, use an intermediary application to view images on your mobile phone on a laptop.

Tools for connecting Android smartphones to computers include:


Connect the mobile phone to the laptop

The software for connecting an Android smartphone to a laptop is Scrappy.

You can download it for free from Github and adapt it to the version of Windows installed on your computer.

Download the SCRCPY software mentioned above and select it according to the version of Windows you are using on your computer.

After downloading the above SCRCPY software, extract the zip file. and before launching the SCRYPY application, we first make the settings on an Android smartphone.

How to set Android as a developer

In order to be able to connect Android phone to laptop, we need to set our Android phone as administrator or developer (developer mode). The method is as follows.

How to Connect Your Android Phone to Laptop First, download the SCRCPY software, which you can download from the link above. Then extract the zip file downloaded earlier.

Plug the USB cable from the smartphone to the laptop and connect it. Then open the SCRCPY app and the computer will automatically read your Android screen and immediately appear on the computer.

The advantage of the SCRCPY app is that all the commands we execute on the computer also work on the smartphone screen.

If you edit with Kinemaster, you can do it right on your computer.

You can change the full-screen display on your computer and modify it with the computer mouse and keyboard.

So we don't need a bluestack or other emulators because all the data from the mobile phone is read on the computer.

And this application is very simple compared to using a bluestack emulator on a computer.

It is not easy to connect Android phone to computer. Please share this article with your friends who might need this tip.