Download Google Camera 7.3 for Realme Narzo 10 and Narzo 10A 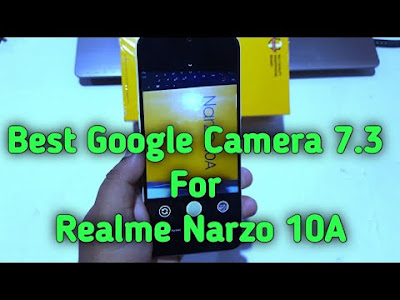 The original Narzo camera app works like all other Realme smartphones. It has all the essential functions as well as the NightScape function. Still, it's not as good as the GCam (also known as the Google Camera app).

The Realme Narzo series phones are equipped with processors from the MediaTek Helio G series. There are currently only a few GCam mods that are compatible with G-series Helio SoCs.

After some research, we found an ideal companion for Realme Narzo 10 and Realme Narzo 10A. The latest mod from Urnyx05 (who ported this app) works well on a duo of Narzo phones. Here is the download link.

How to enable astrophotography mode on GCam
PS: Make sure you download the recommended settings before using the app. This improves the overall performance of the application.

First, download this configuration file to your Realme Narzo 10 or 10A.
Then go to the file manager and create a new folder called GCam.
Open the GCam folder and create another folder called configs7.
Now paste the configuration file into the configs7 folder.
When you're done, open the Google Camera app and double-tap the black blank area next to the shutter button.
Tap the displayed settings available in the pop-up window and tap the Restore button.
Go back to the app drawer and open the app again.
Screenshot:


How to install Google Camera on Realme Narzo 10 and 10A

First, you need to download the GCam mod port and recommended settings using the download links above.
Then permit them to install apps from unknown sources.
Then go to the download folder and install the app.
Now open the app and allow the required app permissions.
That's all.
Note: Before installing the new Gcam Mod application, you must remove the old version (if you installed it). This is not a stable version of Google Camera, so errors can occur.

If you have a request, enter a comment in the comment box. You can also reach us (bassnations.com) via telegram to receive updates. Share this article with your friends too.